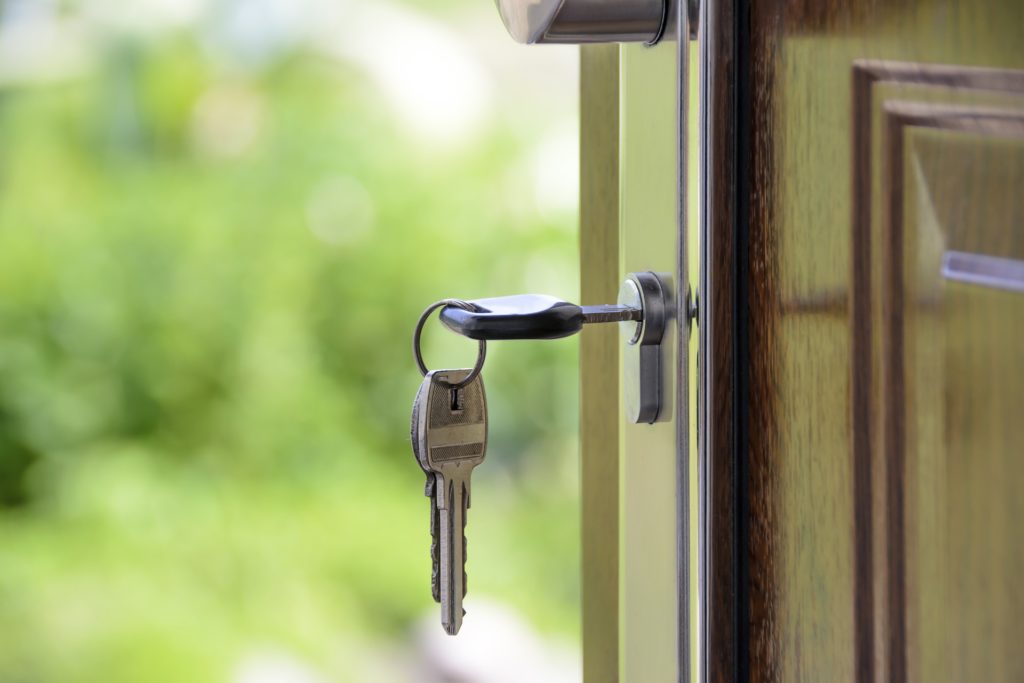 I was twenty-three when I bought my first home. If you’ve ever bought a home, you know the feeling, the rush of accomplishment holding the keys to the American dream in your hand. Ahhh, a home of my very own – in another thirty years, of course. I couldn’t believe my luck, er – hard work. Naturally I did none of this home buying the Dave Ramsey way. Paid nothing down because I was twenty-three and making entry-level salary at a private not-for-profit liberal arts college, but hey, my monthly mortgage was going to be slightly more than what I had been paying in rent, so it made sense. Plus for the first time I’d have no roommates. The American dream, folks. Can you dig it?

What is it about the American dream that has warped into rewarding people for buying stuff over actually owning stuff. We praise people for going into debt, but if someone wants to do it without credit, they’re punished.

My Grandmother who owns her own farm which she paid cash for and has paid cash for everything her whole life was denied the ability to get a cell phone. That’s right. The cell phone company turned her down because she didn’t have any credit. Someone who bought and paid for her farm with hard work, sweat and cash payments (but didn’t make payments to a bank) couldn’t get a cell phone. Enough on that for now, though. Let’s get back to my first home I mortgaged – from a bank.

A Home of My Very Own – Eventually, That Is

Excitedly, I looked at homes in my price range. A bit of an eye-opener that was. Some of the homes were pretty slanted, literally. You wouldn’t have wanted any of your furniture on wheels if you wanted it to stay anywhere but against the back wall. And there was a fixer-upper that was considered a solid investment, but it came with nothing except walls, electric and sub-flooring. So that took the price up to . . . no thank you.

At long last, I found my little slab home with a carport and minimal issues. Signed the next thirty years of my life away and went to my new home with all my hand-me-down furniture, flea market treasures, and the keys to the front door. As a part of the purchase agreement I got to select a brand new refrigerator and stove. Quite the exciting purchases at the time. A couple coats of paint, window A/C units, some mini blinds, and a bit of landscaping, and it was ready for the big house warming.

By this time in my life, I hadn’t finished my bachelor’s degree, but I was working full-time and had bought my own home. Folks, I felt like I had made it. Opening the doors for that housewarming welcoming my friends and family in felt good. Reality didn’t quite catch up to me until later on.

You see, as I mentioned earlier, I didn’t do things the Dave Ramsey way. It logically made sense that I’d not be spending much more than rent, but I didn’t calculate it all out beforehand. Budgeting wasn’t something I did much of. Basically, payday came, bills went out, the rest was for fun – leather coats and such, right?

Living paycheck to paycheck meant that I typically spent my money before it hit the bank. Payday no longer held that rush of excitement. I’d work my tail off at my 8-5 entry-level desk job Monday through Friday so that I could earn said paycheck only to have it fly out the window as soon as it hit the bank. Talk about a buzz kill. American dream, folks. American dream. You see, something I didn’t learn until later was the whole patience thing about when the hard work pays off. I was still operating under the buy now pay later idea. Well, I was paying.

Those offers kept coming in the mail to get 0% interest for so many months for balance transfers. Oh Discover, we go way back. Member since 2000. Even though I cut up my card several years ago, and I gave them my fax machine in lieu of phone number about ten years ago, they are still holding out hope that I’ll use my card again. I get the occasional email these days but that’s all now. It wasn’t always that way though. I suppose that’s how we learn our lessons – the hard way. I’d like to say if I could go back I’d burn that offer letter, but I can’t honestly say that.

I used to get those paper checks in the mail from the credit card companies. Do they still mail those out? They used to send them to me all the time! I finally called each credit card company and told them to stop. It became a nuisance having an extra item to shred each time they arrived. Yet they did come in handy a time or two. (That was before I got to the point of burning them each time they arrived.)

There was that time I saw an ad in the classifieds for a cat for sale. Yes, you read that correctly. A cat for sale. I know, most classifieds say, “Free Kittens,” so you’re probably wondering what kind of cat this was. Well, this was the cutest (or ugliest if you ask some) little fur ball I ever laid eyes on. I went to the location in the ad just to take a look – “window shop” for a kitty, if you will. The breeder told me he was on sale because “he had too much nose to be a show kitty.” (Normally their nose is supposed to be inverted and his stuck out just a touch.) Plus he was already four months old, and most buyers were passing him up for the eight week old kittens.

I held the tiniest, fluffiest little kitten in my arms and immediately asked, “Will you take a check?” thinking of the checks in my pocketbook Discover had been so kind as to mail me just the week prior. They happily agreed, and I was on my way home with my new best friend, Pruitt Rufus Augustus. 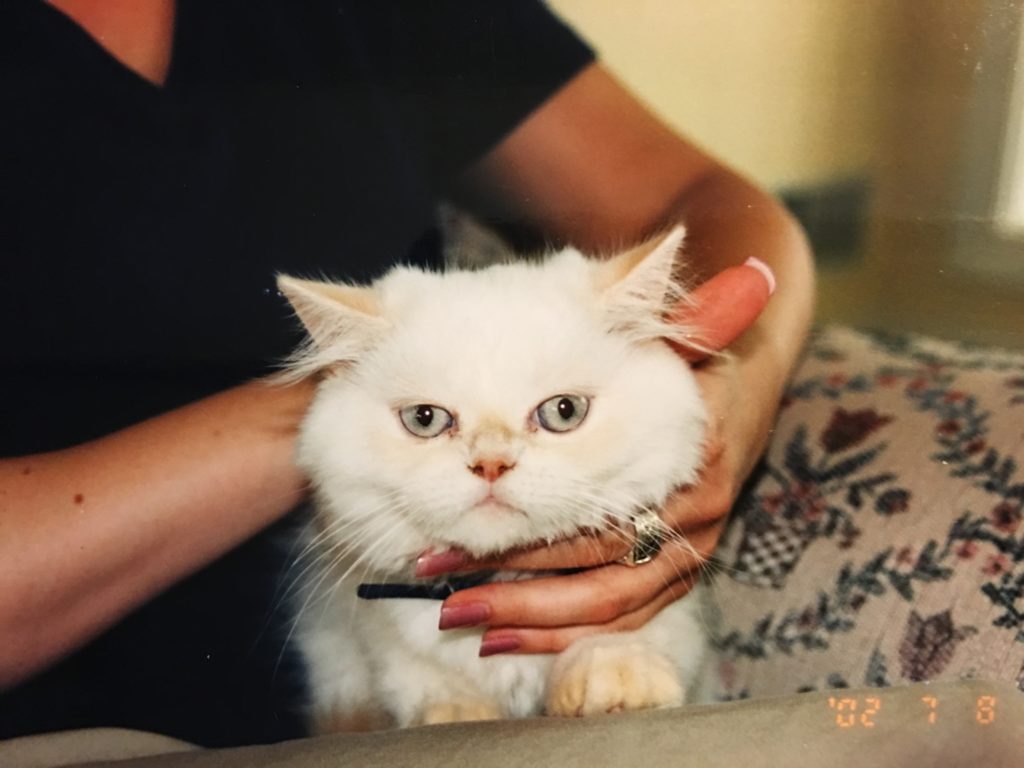 Those handy-dandy cash advance checks, along with several other poor decisions, would lead to losing my new home a mere two years later. More specifically, I’d make the tough decision to sell, as decisions like Pruitt would catch up with me. More on that later, though. Meanwhile, time to take my pocketbook, and decorate in my next post!

Thanks for reading! If you enjoyed this, please share.

I’d love to hear from you. Leave a reply in the comments below.

This was installment three of my Pocketbook Confessions. Catch up on the previous two posts here:

The Leather Coat the Devil Bought Me

Processing…
Success! You're on the list.
Whoops! There was an error and we couldn't process your subscription. Please reload the page and try again.

Hi there! I’m Katherine, a former higher education professional turned housewife, blogger and entrepreneur. My blog is about finding happily ever after in the middle of the mundane, using gratitude and a positive mindset to turn the ordinary into extraordinary. I like to tell stories, so this is a collection of short stories, some true, some fiction, to hopefully inspire more happiness in this broken world. View all posts by pixiedustandwhiskey

4 thoughts on “The Keys to the American Dream”